Luke Combs to Perform for SiriusXM and Pandora in Phoenix

January 12, 2023 10:00am EST Download as PDF
Exclusive concert on February 9 at Arizona Financial Theatre to kick off the big game weekend
Full performance to air live on SiriusXM’s The Highway channel 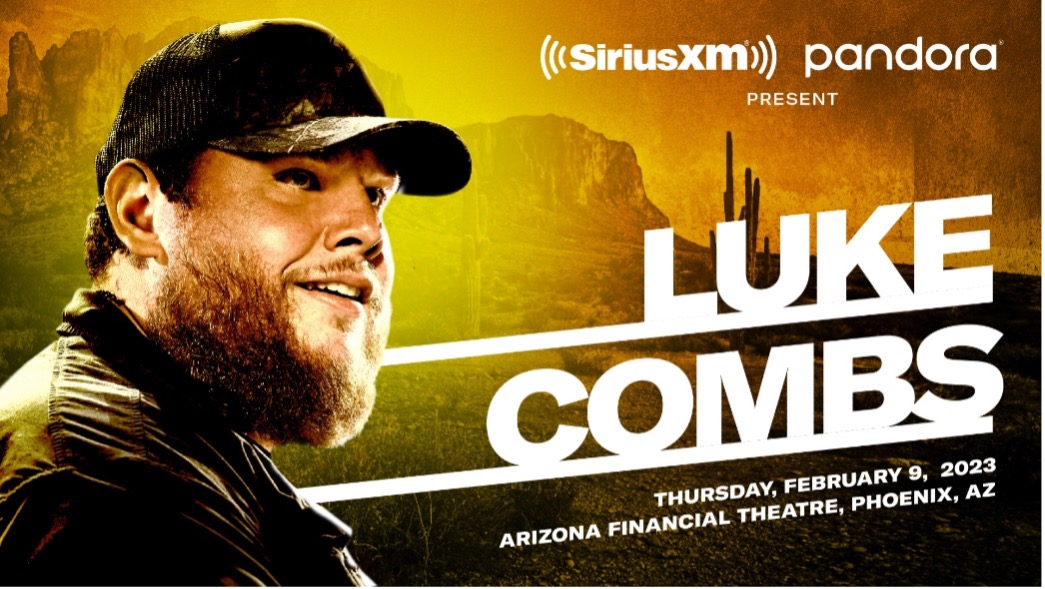 NEW YORK, NY – January 12, 2023 – SiriusXM announced today that reigning CMA Entertainer of the Year Luke Combs will kick off football’s biggest weekend with an exclusive concert for SiriusXM and Pandora on Thursday, February 9 at the Arizona Financial Theatre in Phoenix.

The special concert, hosted by SiriusXM The Highway’s Storme Warren, will feature Luke Combs performing songs from his latest album Growin’ Up as well as fan favorites. Ahead of the concert, Storme Warren will sit down with Luke Combs for an exclusive interview to discuss his new music, touring, becoming a father and more.

The event will be open to SiriusXM subscribers and Pandora listeners. Fans can RSVP to attend the in-person show HERE.

“I am super excited to team up with SiriusXM and Pandora for this performance. It’s going to be a party!” – Luke Combs

“Luke Combs is one of today's most prolific entertainers. What better way to celebrate one of the biggest weeks in sports than with him on our stage,” said Scott Greenstein, SiriusXM's President and Chief Content Officer.

The special performance will air live on SiriusXM’s The Highway (ch. 56) on Thursday, February 9 at 11:00 pm ET and will be available to stream on the SXM App. Luke Combs is a previous SiriusXM Highway Find, the highly sought-after spotlight platform on SiriusXM's The Highway. Past Highway Find artists include Sam Hunt, Ashley McBryde, Carly Pearce, Chase Rice, Cole Swindell, Dan + Shay, Florida Georgia Line, Maddie and Tae, and Maren Morris.

Country superstar and reigning CMA Entertainer of the Year Luke Combs is a multi-platinum, award-winning artist from Asheville, NC. Adding to an already monumental career, Combs will release his highly anticipated fourth studio album March 24 via River House Artists/Columbia Nashville. The record follows his widely acclaimed record, Growin’ Up, which debuted at #1 on Billboard’s Top Country Albums chart this past summer. Continuing to receive overwhelming praise, The Tennessean declares Combs, “one of music's mightiest voices and a hitmaking force arguably unlike any seen out of Nashville this century," while Rolling Stone proclaims, “his detail-rich songs make Growin’ Up a big-time country album with a tip-jar-worthy intimacy" and Vulture praises, "a true country-music behemoth." Growin’ Up features twelve songs including “The Kind of Love We Make,” which reached #1 on both the Billboard Country Airplay and Mediabase/Country Aircheck charts. This is Combs’ fourteenth-consecutive #1 single, yet another historic feat. Moreover, Combs’ current single, “Going, Going, Gone,” is currently top 20 and rising. Known for his electric live shows, Combs will kick off his massive World Tour this spring, which includes sixteen North American stadium shows, all of which sold out immediately. With 39 shows across 3 continents and 16 countries, the record-breaking run is the largest tour ever for a country artist. An 8x CMA, 3x ACM and 3x Billboard Music Award-winner, Combs is nominated for three more awards at the 65th Annual GRAMMY Awards: Best Country Album (Growin’ Up), Best Country Song (“Doin’ This”) and Best Country Duo/Group Performance (“Outrunnin’ Your Memory” with Miranda Lambert).

SiriusXM is the leading audio entertainment company in North America with a portfolio of audio businesses including its flagship subscription entertainment service SiriusXM; the ad-supported and premium music streaming services of Pandora; an expansive podcast network; and a suite of business and advertising solutions. Reaching a combined monthly audience of approximately 150 million listeners, SiriusXM offers a broad range of content for listeners everywhere they tune in with a diverse mix of live, on-demand, and curated programming across music, talk, news, and sports. For more about SiriusXM, please go to: www.siriusxm.com.