The new channel will feature Conan’s original commentary, the very best moments from the Team Coco archives, podcasts from the popular comedy brand, and more 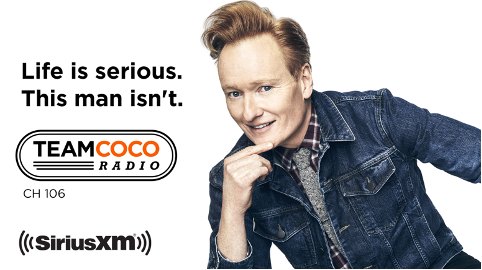 Available 24/7, Team Coco Radio will be the home to Conan’s unique combination of smart and silly comedy. All day long listeners will hear the biggest interviews and the funniest stand-up moments from Conan’s iconic TBS show, as well as select Team Coco podcasts, including Conan O’Brien Needs a Friend, plus Inside Conan and Conan O’Brien Needs a Fan. Fresh commentary from Conan will also be weaved throughout the programming, as he recalls funny behind-the-scenes stories and other entertaining and insightful anecdotes.

“Finally, a use of satellite technology that in no way benefits mankind,” said Conan O’Brien.

“Conan’s wit and wisdom at a time when laughter is at a premium has never been more important. Conan 24/7 on Team Coco Radio is the 6-foot-4 boost to your day," said Scott Greenstein, SiriusXM’s President and Chief Content Officer.

Team Coco Radio is also expected to roll out original programs, as well as events hosted by Conan, including musical performances.

In May SiriusXM announced that it had acquired Team Coco. As part of the transaction, Conan entered into a five-year talent agreement with SiriusXM under which he will remain host of his namesake podcast, which continues to be available widely and is produced by Team Coco staff.

Built on the spirit of Conan O’Brien’s brand of smart and silly comedy, Emmy® winning Team Coco, a subsidiary of SiriusXM, is a fan-centric digital media and podcast network driven by O’Brien and a carefully curated network of top talent. Since launching more than a decade ago, Team Coco’s digital and branded content has garnered more than 1 billion annual video views across YouTube and Facebook while reaching 17 million fans across social media. Team Coco Podcasts currently produces a robust slate of award-winning shows such as Conan O’Brien Needs a Friend, Literally with Rob Lowe, Significant Others with Liza Powel O’Brien, Why Won’t You Date Me with Nicole Byer, Scam Goddess with Laci Mosley, and many more.