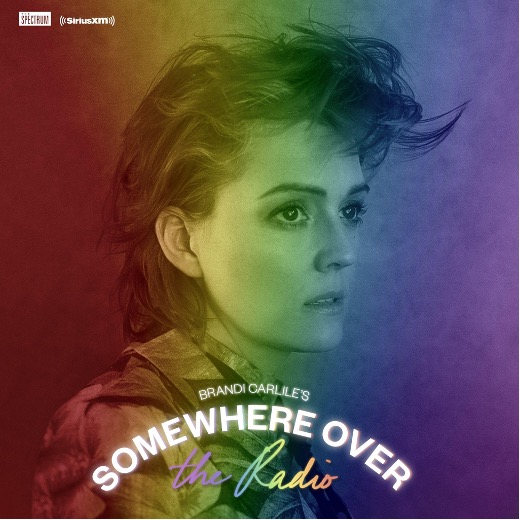 On the show, Carlile will curate the music, focusing on artists who are part of the LGBTQIA+ community and their allies. In the premiere episode, Carlile is joined by her wife Catherine Carlile to share music from artists like Tracy Chapman, Elton John, Antony And The Johnsons, Arlo Parks, Indigo Girls, Sister Rosetta Tharpe, Dolly Parton, and more. Carlile will also share personal anecdotes between songs and engage in candid conversations with her guests.

“This show is about the impact that LGBTQIA + artists have made on the world, the spiritual realm, and certainly our family through the transcendence of music,” says Carlile. “Queer artists and pioneers have given my wife and I everything that we have including each other. Let's shine a little light on queer excellence today.”

Brandi Carlile’s Somewhere Over the Radio premieres August 10 with new episodes airing the first Wednesday of every month at 2 p.m. ET on The Spectrum.

Check out a sneak peek of Somewhere Over the Radio here.

The Spectrum is available to subscribers nationwide in their car and on the SXM App. The SXM App is available to subscribers on mobile devices and a wide variety of connected platforms in the home including smart speakers, smart TVs and streaming media players. Streaming access is included with all of SiriusXM’s audio trials and most popular plans.

Brandi Carlile is a six-time GRAMMY Award-winning singer, songwriter, performer, producer, #1 New York Times Bestselling author and activist, who is known as one of music's most respected voices.

In addition to their work as a band, Carlile and her longtime collaborators—Tim and Phil Handeroth—remain committed to social activism and advocacy. Together they are founders of the Looking Out Foundation, which amplifies the impact of music by empowering those without a voice with varied initiatives including campaigns focused on Children in Conflict/War Child, The IF Project, Fund Racial Justice and more. To date, they have raised over $3 million for grassroots causes.