Listen to a trailer HERE 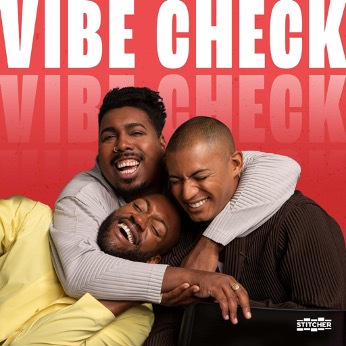 A trailer is available by clicking here. Listen to Vibe Check on Stitcher, the SXM App, and all major podcast listening platforms.

Black, queer culture is the foundation of everything – from Madonna’s “Vogue” to the reign of Lil Nas X – but rarely are those voices at the foreground of cultural commentary and critique. Now Vibe Check has entered the chat, a weekly kiki with three of the world’s most prominent Black, queer creatives, each of whom has spent their careers reporting the news, pushing the culture, and checking the vibes. Listeners will hear Saeed, Sam and Zach discuss everything, from Beyonce’s latest single to the battle over LGBTQ+ rights.

In a joint statement, Sam, Saeed, and Zach said: “We couldn’t be more excited to invite people into our funny, thoughtful, and supportive sister circle on Vibe Check. This show is the culmination of years of friendship, and we look forward to helping you keep your vibe right!”

Vibe Check is created and hosted by Saeed Jones, Zach Stafford, and Sam Sanders. The show is produced by Shantel Holder. Stitcher’s Nora Ritchie and Brandon Sharp of Agenda Management & Production serve as executive producers. Engineering is by Brendan Byrnes and Jared O'Connell. The show's music and sound design is by Marcus Hahn.

Saeed Jones is the author of the memoir HOW WE FIGHT FOR OUR LIVES, winner of the 2019 Kirkus Prize for Nonfiction and the poetry collection PRELUDE TO BRUISE, winner for the 2015 PEN/Joyce Osterweil Award for Poetry. His work has appeared in the New Yorker, New York Times, and GQ. His next poetry collection ALIVE AT THE END OF THE WORLD will be published by Coffee House Press this September.

Zach Stafford is an award-winning journalist, editor, and Tony award-winning producer of the Broadway musical A STRANGE LOOP. Stafford was the first Black editor-in-chief of THE ADVOCATE, served as the chief content officer of GRINDR, and was a journalist at THE GUARDIAN. He is the author of two books entitled BOYS and WHEN DOGS HEAL, and currently serves on the board of directors of the American LGBTQ+ Museum. In 2019, he was included in the Forbes' 30 Under 30 list and named as one of the 100 most influential Black people living today by The Root.

Sam Sanders is the host of Into It, the flagship culture podcast from Vulture which each week breaks down the culture and entertainment stories we can’t stop thinking about. Sanders is also a co-host of Vibe Check, a weekly podcast from Stitcher.

Sanders joined Vulture from NPR, where he was a correspondent and the host of the award-winning radio program and podcast, It’s Been a Minute with Sam Sanders. Prior to It’s Been a Minute, Sanders was a member of NPR’s election unit, where he covered the intersection of culture, pop culture, and politics in the 2016 election, and embedded with the Bernie Sanders campaign for several months. He was also one of the original co-hosts of NPR's Politics Podcast, which launched in 2015. Sanders joined NPR in 2009 as a Kroc Fellow and held many roles within the organization including as a field producer and breaking news reporter.

In 2022, Sanders was named “Best Podcast Host” by The Ambies, and received the NLGJA Excellence in Journalism Award for “Excellence in Radio,” the iHeart Award for “Best Overall Host (male),” and the Los Angeles Press Club National A&E Journalism award for “Best Anchor / Host” in the radio and podcasts category. Sanders was part of a team of journalists who won an NABJ Salute to Excellence Award for their reporting on children living below the poverty line. Sanders is a contributor to the WHYY program Fresh Air, and has written for outlets including the Washington Post, Columbia Journalism Review, and Politico Magazine.