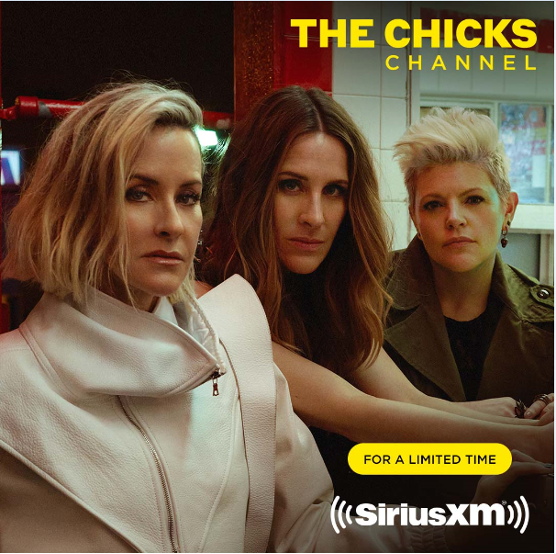 NEW YORK - August 2, 2022 - SiriusXM announced today the launch of The Chicks Channel, a limited-run channel celebrating the music of beloved musical icons, The Chicks. Listeners can tune in to The Chicks Channel beginning today on SiriusXM’s channel 104 and on the SXM App.

“Music has always been a medium that brings people together, a way to connect and find commonality,” said The Chicks. “As we continue to connect with our fans across the country on tour, we are so happy to also bring our music across the airwaves on our own SiriusXM channel.”

The Chicks Channel will explore The Chicks’ entire catalog, including some of their biggest hits like “Wide Open Spaces” and “Cowboy Take Me Away,” as well as deep cuts and live performances. The channel will also highlight their latest album Gaslighter, which charted No. 1 on Billboard’s Country Charts.

The Chicks also announced today five new dates for their critically acclaimed The Chicks Tour, which kicked off to rave reviews earlier this summer. The band is set to perform on October 4 at the Walmart Arkansas Music Pavilion in Rogers, AR, with additional stops confirmed in Oklahoma City on October 5 at The Zoo Amphitheatre, October 8 at Cynthia Woods Mitchell Pavilion in Woodlands, TX, followed by back-to-back performances at The Pavilion at Toyota Music Factory in Irving, TX on October 10, and October 11. Public on-sale is set to begin Friday, August 5 at 10:00 am local time on https://thechicks.com/tour.

The Chicks, formerly known as The Dixie Chicks, began in 1989 in Dallas, Texas, and disrupted the country music scene, having since boasted more GRAMMY® wins than any other female group. After nearly 14 years, the group made their long-awaited return in March of 2020 with the release of their hit single “Gaslighter,” the title track of their latest album which was released to rave reviews in July 2020.

SiriusXM is available to subscribers in their car, on their phone and connected devices at home with the SXM App. Streaming access is included for most subscribers. Go to www.siriusxm.com/ways-to-listen to learn more.

For more on The Chicks, please visit www.thechicks.com.