Listen to a teaser trailer or watch a video clip 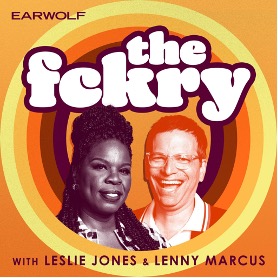 Each week on the fckry, Leslie and Lenny will discuss anything and everything, from getting started in comedy to the effects that current political issues have on us all. The hosts will also interact with listeners, giving unfiltered, unwatered-down answers to some of their biggest questions. In true Leslie Jones fashion, nothing is off the table.

“I have a lot of things to say," said Leslie Jones. "I could have shared them on a daytime talk show where I'd have to censor myself. But in a podcast, I can say what I want. On the fckry, you're getting the uncut, 100% pure Leslie Jones. If you've ever wanted to hang with me and talk, here's your chance."

"Leslie and I talk on the phone all the time, and most of our conversations are us complaining about our lives or the crazy world we live in," said Lenny Marcus. "It usually just devolves into us cracking each other up. And now you, the listener, get to hear that!"

“Leslie and Lenny are incredible comedians in their own right, but together they are a force of nature,” said Codi Fischer, Program Director at Earwolf. “We’re excited to have Stitcher be the home of their first podcast and can’t wait for listeners to hear what they have in store.”

the fckry is created by Leslie Jones and Lenny Marcus, and will be available via Earwolf, Stitcher’s comedy podcast network. The show is produced by Earwolf's Senior Producer Judith Kargbo. Engineering is by Marina Paiz. Steve Martín is the Technical Director. Codi Fischer is the Executive Producer.

the fckry joins an already robust and industry-leading comedy lineup at SiriusXM, the exclusive audio home for top comics and brands, which includes channels such as Kevin Hart’s Laugh Out Loud Radio, Netflix is a Joke Radio, and Comedy Central Radio; Conan O’Brien’s Team Coco, and its top-charting Conan O’Brien Needs a Friend; as well as Stitcher’s Earwolf network and their collection of award-winning and critically-acclaimed shows How Did This Get Made?, Office Ladies, Storytime with Seth Rogen, and more.

Leslie Jones is a three-time Primetime Emmy nominee for Saturday Night Live and is currently starring in the HBO Max series, Our Flag Means Death. Jones will next be seen in a recurring role on season two of Starz’s BMF. She most recently starred in Amazon’s most watched film, Coming 2 America for which she won the MTV Movie Award for “Best Comedic Performance” and was nominated for a People’s Choice Award for “Favorite Female Movie Star.” Jones is set to produce an untitled Christmas comedy for Lionsgate which she is currently developing as a potential future starring role.

Lenny Marcus has been a stand-up comedian performing at all the major comedy clubs in New York City for over twenty years. He has appeared on many late-night shows including the Tonight Show with Jimmy Fallon and the The Late Show with David Letterman.

Lenny has four comedy albums: You’re Getting a Zero and Idiots, Toasters, Meredith – and other things hazardous to your health, Vegan Cupcakes, and his latest entitled Home and Away.