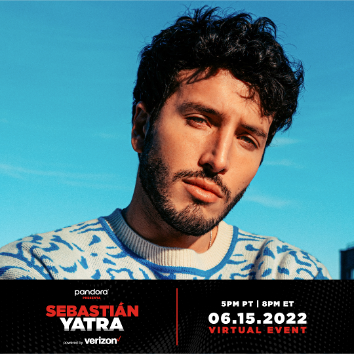 Yatra was 3D scanned using the volumetric capture studio at the Verizon 5G Lab, which will allow him to perform side-by-side with an AR hologram of himself for an iconic rendition of his hit song, “Tacones Rojas,” all powered by Verizon 5G Ultra Wideband and edge compute.

Photos from the capture can be found HERE.

“The technology used in the Verizon 5G Lab to make this performance extra special was incredible. I never thought I’d perform with a hologram of myself,” states Yatra. “Also, thank you to Pandora for bringing this event to my fans.”

“We are thrilled to team up with Verizon to give fans a cutting-edge digital experience where music and technology meet,” said Karina Montgomery, SVP of Strategic Solutions at SXM Media. “Pairing Verizon 5G technology with Pandora’s expertise in the virtual event space, we are excited to bring fans the next generation of concerts and transport them into an immersive AR world where they can experience Sebastián Yatra’s music like never before.”

Marisol Vargas from SiriusXM’s Caliente (ch. 151) will host the event and sit down with Yatra for an in-depth Q&A to talk about his experience at the Verizon 5G Lab, his latest album release and upcoming tour. Attendees will also be able to engage in a live chat and see a special behind-the-scenes segment giving an inside look into how Verizon 5G technology powered the experience.

Since launching its Pandora LIVE virtual concert series in July 2020, Pandora has hosted over 25 music events from a wide variety of genres including Latin, pop, country, R&B and more. With Pandora LIVE, artists can connect with fans (and fans with other fans) - no matter where they are, delivering unique content that can’t be found anywhere else.

Sebastián Yatra stunned at the 94th annual Academy Awards performing a beautiful rendition of the RIAA certified Gold “Dos Oruguitas” from The Walt Disney animated film “ENCANTO” which was nominated this year for an Oscar and a Golden Globe. The multi-platinum singer-songwriter also recently released a powerful bilingual celebration of his single “Tacones Rojos” which reached #1 on Latin Radio in the US, from his multi-platinum new album “Dharma.” The genre-bending 17-track third studio album features his 8x platinum hit “Pareja del Año,'' 4x platinum smash “Chica Ideal,” and the Latin GRAMMYs nominated ballad “Adios,” and boasts 5.4 Billion combined streams. While Yatra has released bilingual collaborations in the past, “Eppure Sembri Qui'' is his first recording in Italian. His next solo music offering following the release of “Dharma,” another feel-good single "TV" is set for release on June 9th along with a heartwarming new music video. Currently nominated for five Latin American Music Awards, four MTV MIAW Awards, and starring in Netflix’s “Érase Una Vez Pero Ya No,” he will resume his 2022 ‘Dharma World Tour' later this month with a series of dates in Mexico, followed by the US and Canada.

Founded in 2013 by Oscar-winning visual effects artists, Magnopus has been shaping the physical-meets-digital landscape for nearly a decade with a world-class team of designers, artists, and engineers working from the company’s flagship studios in Los Angeles and London. Magnopus is known for its continuous innovation in the entertainment industry; Emmy-nominated VR projects; being a leader in virtual production through its revolutionary work on Disney’s The Lion King (2019); and its pioneering work in AR. After more than 90 groundbreaking projects in the XR space, the Magnopus team is now working to empower anyone to easily create metaverse content.

Pandora, a subsidiary of SiriusXM, is the largest ad-supported audio entertainment streaming service in the U.S. Pandora provides consumers a uniquely-personalized music and podcast listening experience with its proprietary Music Genome Project® and Podcast Genome Project® technology. Pandora is also the leading digital audio advertising platform in the U.S. Through its own Pandora service, its AdsWizz platform, and third party services, such as SoundCloud, the Company connects brands to the largest ad-supported streaming audio marketplace in the country. Pandora is available through its mobile app, the web, and integrations with more than 2,000 connected products.

Verizon Communications Inc. (NYSE, Nasdaq: VZ) was formed on June 30, 2000 and is one of the world’s leading providers of technology and communications services. Headquartered in New York City and with a presence around the world, Verizon generated revenues of $133.6 billion in 2021. The company offers data, video and voice services and solutions on its award-winning networks and platforms, delivering on customers’ demand for mobility, reliable network connectivity, security and control.