Shinedown to Perform for SiriusXM in Asheville, North Carolina 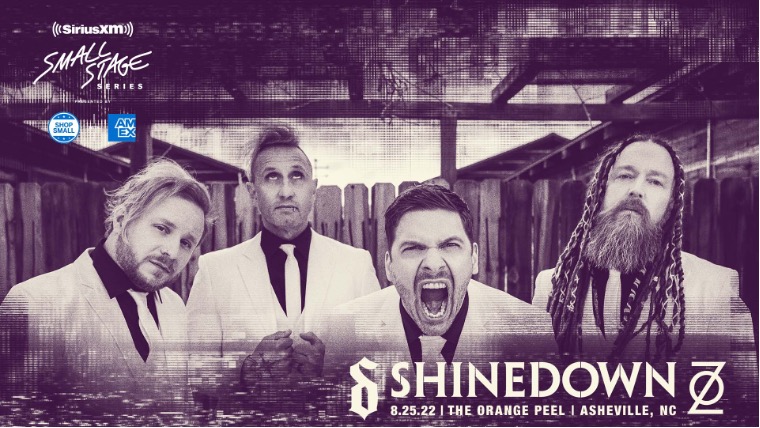 The special concert will feature Shinedown performing songs from their brand new acclaimed album Planet Zero, including the soaring anthem and current single "Daylight," and lead single and title track "Planet Zero" , as well as many of their biggest hits such as “Sound of Madness,” “Second Chance” and “Cut The Cord.” An incisive look at divisive societal forces alongside a message of hope, perseverance, and empathy, Planet Zero, out now on Atlantic Records, debuted in the Top 5 on the Billboard 200 Chart and at #1 on 6 other charts including Top Album Sales, Top Rock Albums, Top Hard Rock Albums, and Top Alternative Albums Charts.

Shinedown Radio will delve into the band’s 20-year music career, providing insight behind their greatest hits as well as their new album. The channel will also spotlight other artists that the band has toured with including Halestorm, Highly Suspect and Jelly Roll, as well as artists who influenced Shinedown including Soundgarden, Iron Maiden, Prince and more.

The exclusive channel will launch on Friday, August 26 and run through Friday, September 23 on the SXM App. Shinedown Radio will also be available on SiriusXM radios (ch. 37) on Friday, August 26 through Monday, August 29. The SXM App is available to subscribers on mobile devices and a wide variety of connected platforms in the home including smart speakers, smart TVs and streaming media players. Streaming access is included with all of SiriusXM’s audio trials and most popular plans.

With American Express’ long history of supporting small businesses, particularly through its Small Business Saturday® and year round Shop Small® efforts that support independent businesses and the communities they are a part of, the brands came together on SiriusXM’s Small Stage Series to encourage consumers to Shop Small this Summer.

Multi-platinum band Shinedown - Brent Smith [vocals], Zach Myers [guitar], Eric Bass [bass, production], and Barry Kerch [drums] - have cemented their status as one of the most vital and forward-thinking powerhouses in music, embodying the kind of creative dynamism that transcends boundaries with over 6.5 billion global streams, a record-breaking 18 #1 rock hits, 14 platinum and gold singles, platinum or gold certification for every album, 10 million albums sold worldwide, and major media acclaim. They are known for their timely and honest messages behind their chart-topping songs that resonate with not only their global audience and the rock community, but our culture at large.