Måneskin to Perform for SiriusXM in New York City

Performance to premiere on the SXM App and air in its entirety on Alt Nation, with select songs also airing across multiple SiriusXM music channels 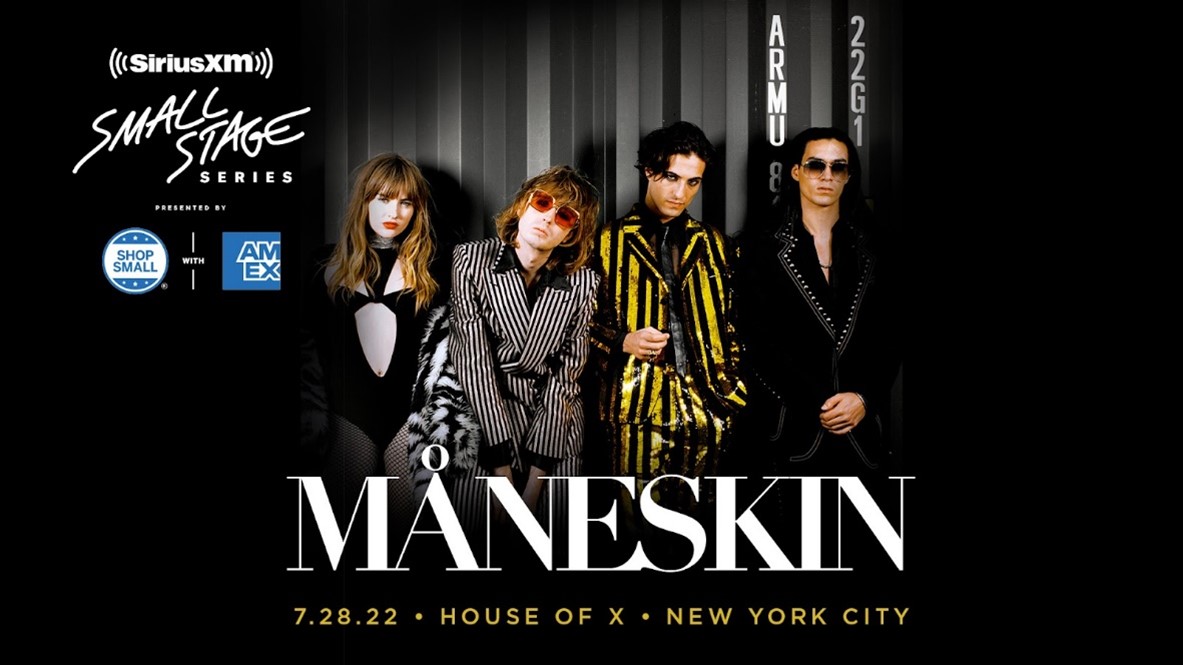 Måneskin’s Small Stage Series concert will premiere exclusively on the SXM App on Monday, August 1 and can be heard in its entirety on SiriusXM’s Alt Nation (ch. 36) on Friday, August 5 at 5:00 pm ET. Additionally, select songs from the show will air across multiple SiriusXM music channels including SiriusXM Hits 1, The Pulse, Pop Rocks and Pandora NOW.

SiriusXM subscribers and fans will have opportunities to attend this private performance. SiriusXM subscribers as of June 23rd can enter for a chance to win by going to siriusxm.com/ManeskinNYC. See Official Rules for details. Fans can follow @altnation and look for details on how to win tickets. No Purchase Necessary. Void where prohibited. U.S. only; 21 years of age or older.

With American Express’ long history of supporting small businesses, particularly through its Small Business Saturday® and year round Shop Small® efforts that support independent businesses and the communities they are a part of, the brands came together on SiriusXM’s Small Stage Series to encourage consumers to Shop Small this Summer.

SiriusXM’s Hits 1, Alt Nation, The Pulse, Pop Rocks and Pandora NOW are available to subscribers nationwide on SiriusXM radios, the SXM App, and with Amazon Alexa, the Google Assistant or however they stream at home. Streaming access is included with all of SiriusXM’s trials and most popular plans.

MÅNESKIN is a critically acclaimed four-piece-rock band that began busking on the streets of Rome as teenagers, and now just a few years later, are a razor tight group of captivating musicians widely hailed for being at the forefront of driving a worldwide resurgence of Rock music.  The past year has seen the band reach over 5 BILLION streams, while surging to #1 in numerous countries and across the Global charts of multiple digital platforms (including the #2 TikTok song of 2021). Within just 2 ½ months of their very first visit to The United States for landmark showcases at the BOWERY BALLROOM (NYC) and THE ROXY (LA), MÅNESKIN have skyrocketed from the massive support of  social platforms, nationwide radio, an opening slot invitation from The Rolling Stones and multiple breakthrough TV appearances such as The Tonight Show, Ellen, The Voice & The American Music Awards.  This resulted in numerous and record-setting Billboard #1 chart placements, including “Top New Rock Band of the Year” and 2021's longest #1 run at Alternative radio.  The band’s meteoric rise  has continued straight into 2022, as they performed on Saturday Night Live, were hailed by The Los Angeles Times as:  “America’s New Favorite Rock Band,”  WON the Billboard Music Award for “Top Rock Song”  and the iHeartRadio Music Award for “Best New Alternative Artist”, and were named “The Breakout Artist” of this year’s famed COACHELLA festival for their widely praised performances. Most recently MÅNESKIN contributed a rendition of “If I Can Dream” for the “ELVIS” major motion picture and soundtrack,  and their latest single “SUPERMODEL” has quickly surged up the Alternative, Rock and Pop radio charts,  while already being hailed by many press outlets  as a top “SONG OF SUMMER” contender.

Shop Small is a movement that supports small, independent businesses and calls attention to the valuable and distinct contributions they make to their communities and the economy. Shop Small celebrates small businesses ranging from retail stores and restaurants to fitness studios and salons, and everything in between. The Shop Small movement was spurred by the widespread participation in Small Business Saturday, a day founded in 2010 by American Express. This national holiday shopping tradition is dedicated to celebrating small businesses and driving more customers through their doors on the Saturday after Thanksgiving. November 27, 2021 marks the 12th annual Small Business Saturday, proudly backed by American Express. Learn more and connect with us on ShopSmall.com, instagram.com/shopsmall, facebook.com/SmallBusinessSaturday