NEW YORK, May 4, 2022  /PRNewswire/ -- SiriusXM announced today that legendary rock band, Def Leppard, will play a special invitation-only concert in Los Angeles at the Whiskey a Go Go for SiriusXM listeners. The intimate performance, part of SiriusXM's Small Stage Series, will take place on Thursday, May 26, in celebration of Def Leppard's forthcoming album Diamond Star Halos which is scheduled to be released on Friday, May 27. 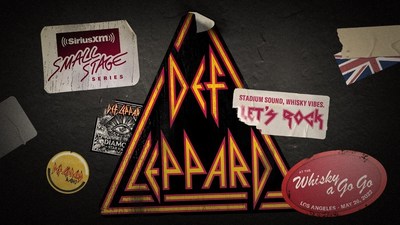 On June 16, Def Leppard is set to kick off "The Stadium Tour" which will hit 36 major cities across North America. Def Leppard will be joined by Motely Crüe, Poison, and Joan Jett for this massive and highly anticipated stadium run. Prior to Def Leppard's tour, this will be the first-time fans can see the band perform new songs live from their latest album live in addition to the stadium anthem hits that cemented them as rock icons. The performance will premiere on SiriusXM's Def Leppard Radio and Howard 101 on Friday, May 27 at 5:00 pm ET and PT. Additionally, the concert will broadcast throughout June on Classic Rewind (ch. 25) and 80's on 8.

Featuring a slew of guest hosts, Def Leppard Radio will delve into the band's 40-year music career, providing insight behind both their greatest hits and their new album. Def Leppard Radio will also spotlight other artists performing on their stadium tour like Mötley Crüe, Poison and Joan Jett, as well as artists who influenced Def Leppard including David Bowie, Queen, T. Rex, Mott The Hoople and more.

SiriusXM is available to subscribers nationwide on SiriusXM radios, the SXM App, and with Amazon Alexa, the Google Assistant or however they stream at home. Streaming access is included with all of SiriusXM's trials and most popular plans.

With more than 110 million albums sold worldwide and two prestigious Diamond Awards in the U.S., 2019 Rock & Roll Hall of Fame® inductees Def Leppard - Joe Elliott (vocals), Phil Collen (guitar), Rick Savage (bass), Vivian Campbell (guitar) and Rick Allen (drums) — continue to be one of the most important forces in rock music. Over the course of their career the band has produced a series of classic ground-breaking albums that set the bar for generations of music fans and artists alike. The group's spectacular live shows and arsenal of hits have become synonymous with their name, leading Def Leppard to be heralded as an institution in both the music and touring industry. Def Leppard's influential career includes numerous hit singles and ground-breaking multi-platinum albums—including two of the best-selling albums of all time, Pyromania and Hysteria, capturing the group's legendary tracks, bringing together classic Leppard hits such as "Rock of Ages", Pour Some Sugar on Me" and "Foolin."  For the first time, in January 2018 Def Leppard debuted their full recording catalog worldwide via streaming and download platforms. As they did with the original release of their records, Def Leppard dominated the worldwide charts again.  Chart stats saw their albums charting in the iTunes Top 10 in more than 30 countries, including Hysteria at #3 in the US, and #5 in the UK.  Def Leppard had the #1, #2 and #3 records on the US catalog albums chart. The band have amassed a staggering 5.5 billion streams since 2018, reaching a younger 18-44 demographic that now represents 58% of their fanbase. Additionally, the band have garnered an impressive 15 million followers across their social media platforms. Following the close of their historic 2018 co-headline stadium and arena run in North America, Def Leppard sold a staggering 1,000,000 tickets and the tour grossed over $100,000,000.00, a massive feat in today's touring world. Def Leppard will top that number yet again with another sold out North American stadium run in 2022 which is set to kick off the rest of the world. As always, the group keep pushing the boundaries with their electrifying live shows.